The Blue and White • October 6, 2020 • https://bhsblueandwhite.com/592/features/the-massive-problem-with-the-electoral-college/

The Massive Problem with the Electoral College 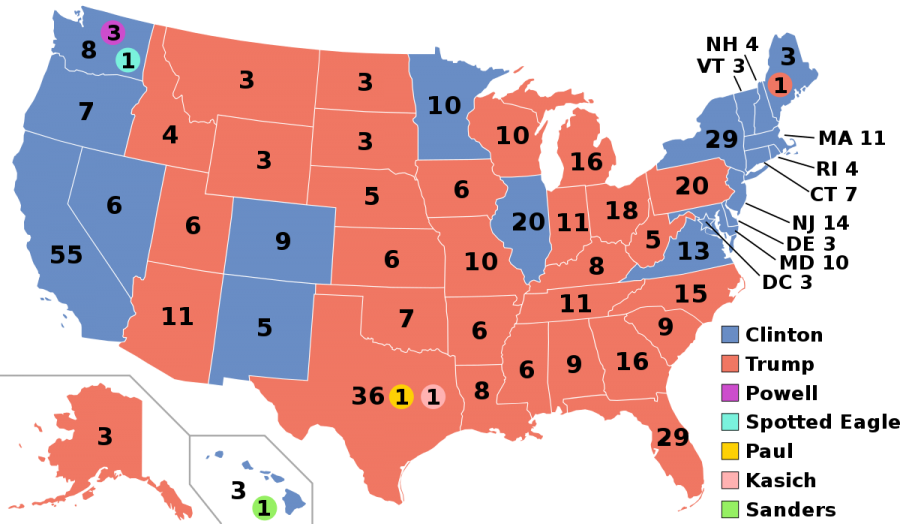 According to the Federal Elections Commission, In the 2016 presidential election Hillary Clinton won the popular vote with 65,853,514 votes to Donald Trump’s 62,984,828 votes. You would think that because more people voted for Clinton, she would win, but as we all know, Donald Trump became the 45th President of the United States. This is because of the electoral college. The electoral college, as defined by Oxford Languages, is a body of people representing the states of the United States, who formally cast votes for the election of the President and Vice President.

But, who are the Electoral College, and how are they chosen? The number of electoral votes is determined by the number of representatives for the states and the two senators, which is why some states have more than others. The actual people that do the votes are chosen by the political parties and whoever wins sends their representatives to vote. The way that the electoral college works in 48 states is that whichever candidate earned more votes gets all the electoral votes. For example, if in California, Hillary Clinton earned one more vote than Trump from the people, than she would get all 55 votes. As you can see from this example, this can lead to a very small majority getting more electoral votes than in relation to the actual amount of votes.

In 2000 George Bush and Al Gore were running for president. On election day after all the votes were cast the vote in Florida was barely in Bush’s lead with him having only 537 more votes triggering a massive mandatory recount. While this recount was triggered state wide Gore got even more recounts for specific counties because every vote mattered and whoever won Florida would become the president. After a couple months of recounting and a Supreme Court case, it was decided that the recounts would stop prematurely with Bush still in the lead, so he controversially became the 43rd President of the United States. This highlighted the crucial states needed to win, which changed how politicians campaigned and led to the same thing happening in 2016 but with an even wider margin.

So why don’t we get rid of the electoral college system and choose our President by popular vote? Well, when the constitution of the United States was written there was an argument over whether the people should vote on a one person one vote standard or if congress should vote without any input from the people. The electoral college was seen as a compromise to this argument, where the people vote and then Congress votes loosely based on how the people voted.