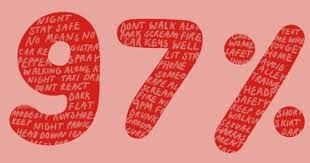 Recently, on March 3, Sarah Everard’s body was discovered in the woods outside of her county after she disappeared while walking home. She had been taking all of the precautions to stay safe as a woman walking alone; wearing bright clothes, talking on the phone with her boyfriend, and walking in a well-lit area. She was still kidnapped and murdered.

This story has hit home with a lot of women who are able to relate to what Everard went through. She was 33 years old when she died. She represents the worst fear that most if not all women have when they are alone. According to UN Women United Kingdom, 97% of women in their study have said that they experienced sexual harassment. That is a strikingly high number.

The story of Sarah Everard and the 97% news has opened the eyes of a lot of people, but has also received a lot of backlash. The phrase “Not All Men” has been the main rebuttal to the 97% claim. It means that women shouldn’t fear all men, and that not all men are bad. Of course this is true.

The definition of sexual assault has changed over time. It used to be qualified as rape. Now, it covers everything from rape to catcalling; sexual assault is defined as “any type of sexual contact or behavior that occurs without the consent of the recipient” by seattle.gov. Sometimes, people don’t even know that they’re a part of the 97% because of the normalization of it.

The purpose of this 97% movement is to call to light the breadth of sexual assault. 97% is too many women. Any percent is too many people. The way to help spread awareness is to talk about it. Believe the victims. There are people who take it upon themselves to use the accusation of sexual harassment, even when it is not entirely true. However, claims should not be dismissed; it is always better to investigate claims of sexual harassment before filing them away as untrue. Still, most people are not victimizing themselves; no one wants this. No person at all wants to be the victim of sexual assault. Talk about it with your male friends and your female friends. Spreading awareness helps prevent people from doing this. It also helps make it a safer space for people who have experienced sexual assault.

With the normalization of sexual assault, you might not know if you are a part of the problem. If you don’t think you are, you probably know someone who is. You also definitely know someone who is a part of the 97%. Be cognizant of your actions, and the actions of others. If you are a part of the problem right now, you don’t have to stay that way. Change your actions and the way you interact with women. Do not be afraid to step in when you see it happening. Call it out. Take it seriously by taking action to help.